Main Menu
Home About Us Education Programs Groom Elite Graduates Events Calendar Partners In Their Words... Request a Quote Volunteer Photo Gallery FAQs Donations Susan's Trail Ride Bookstore Industry Links Contact Us
Events Calendar
Our History
The Elite Program was started by Susan O'Hara, an owner of racehorses who believed that her horses would have a better chance of competing effectively and retiring reasonably sound if the people that spent the most time with them, the grooms, were not discounted as necessary evils, but were provided with knowledge and skills training that would enable them to more effectively take care of their assigned horses. Initially planned as a monthly "seminar" in Sam Houston Race Park's track kitchen, intense interest from grooms encouraged development of a ten-lecture class, copiously illustrated, translated into Spanish, taught simultaneously in English and Spanish and FREE to licensed stable area workers. To provide credibility and incentive, grooms that attended at least 80% of the classes, scored at least 70% on a written assessment and met minimum standards at five different practical application assessment stations would be "certified" as Elite Grooms.Proud 101 Groom Elite Graduates Certified grooms would be presented with a certificate and a high quality logo 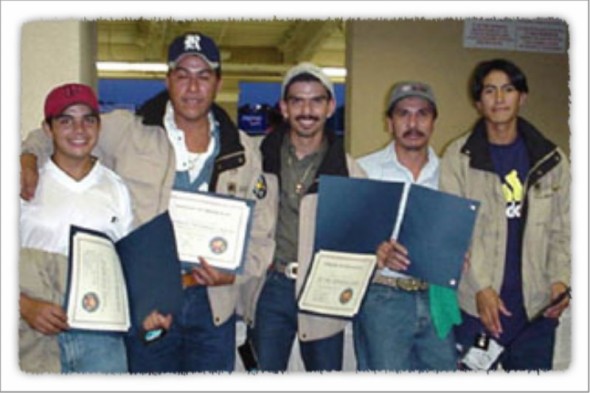 jacket that would identify them as individuals that had improved their skills and increased their likelihood for advancement. The first class was presented at Lone Star Park in Spring 2001 with a second class at Sam Houston Race Park later that same year. Trainers that had grooms in those classes were impressed and asked about the possibility of Groom Elite 101 classes being taught at tracks in other states. In summer 2002 Colonial Downs became the first track outside of Texas to offer Groom Elite 101.

Through 2006, Groom Elite 101 was taught over 25 times at 17 tracks in 12 states and indirectly influenced thousands of grooms, hot walkers, and exercise riders that attended short courses and observed one or more Elite Program classes. The Texas Horsemen's Partnership, local Texas owners and Texas' three Class I racetracks provided initial financial and in-kind support to establish that first class at Lone Star Park. As the program moved outside the borders of Texas,

financial support was received from national equine organizations and businesses plus owners and trainers of racehorses in the areas where classes were offered. Grooms that completed Groom Elite 101 asked for additional training. Owners, trainers, farm grooms and youth groups asked for similar opportunities. Development of classes for those groups plus Increasing demand for Groom Elite classes strained the resources of this primarily volunteer organization. In 2005, a full time Executive Director was hired and The Elite Program opened an office in Lexington, Ky to facilitate formalization of the complete Elite Program offering. In 2006 The Elite Program participated in the planning and development of the North American Racing Academy, a vehicle that will further The Elite Program's mission of providing outstanding equine education at no-cost to front-line equine care workers and at minimal cost to others.